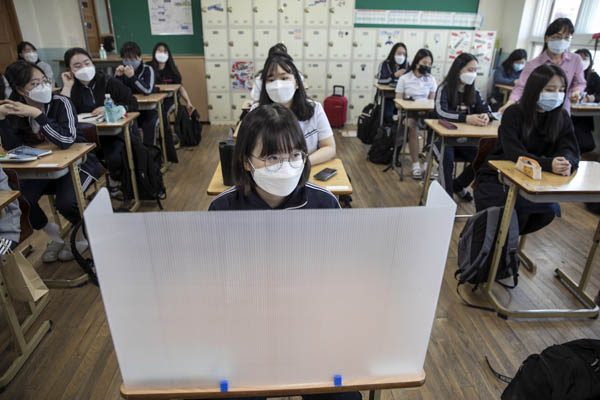 Almost 2,000 schools in South Korea have suspended in-person classes following the latest spike in the cases of novel coronavirus. The country’s Ministry of Education made the announcement on August 24.

The country recorded at least 266 new Covid-19 cases in the past 24 hours as of August 23 local time. Of the new infections, a vast majority of 201 cases were logged in capital Seoul, says the novel coronavirus (KCDC).

At least 1,845 schools across the nation will be closed in accordance with the government decision. And this is the first time since May that more than 1,000 schools in the country will be closed for the virus, reads the announcement.

According to the ministry, a total of 283 students and 79 faculty members have tested positive for the virus since May 20 when the country started to bring back students to classes in phases.

Schools In Seoul Shift To Online Instruction :  Schools in the greater Seoul area is suspending all in-person classes from August 26 due to rise in corona infections, according to the country’s education ministry on August 25.

The schools in the region will now move to online instructions only. The measure will be in place till at least September 11.

A statement from the ministry states that the decision will be applicable to all kindergartens, elementary, middle, and high schools in the greater Seoul area including Seoul City, Incheon City and Gyeonggi Province for the period.

There are more than 7,500 schools in Seoul and its surrounding areas, according to the latest statistics by the Education Ministry from 2019.

Some 150 students and 43 faculty members in the metropolitan area have tested positive since cluster infections in the area began on August 11, the release said.

He also said that recent cluster involving capital Seoul is much more severe than those including controversial church cluster detected in early days of the virus outbreak in the country.

According to the country’s Centers for Disease Control and Prevention, there are now at least 17,945 cases and 310 deaths in the country. Some 14,286 patients have recovered so far. Among the remaining active cases, 3,349 remain in quarantine and 38 patients are in critical condition.