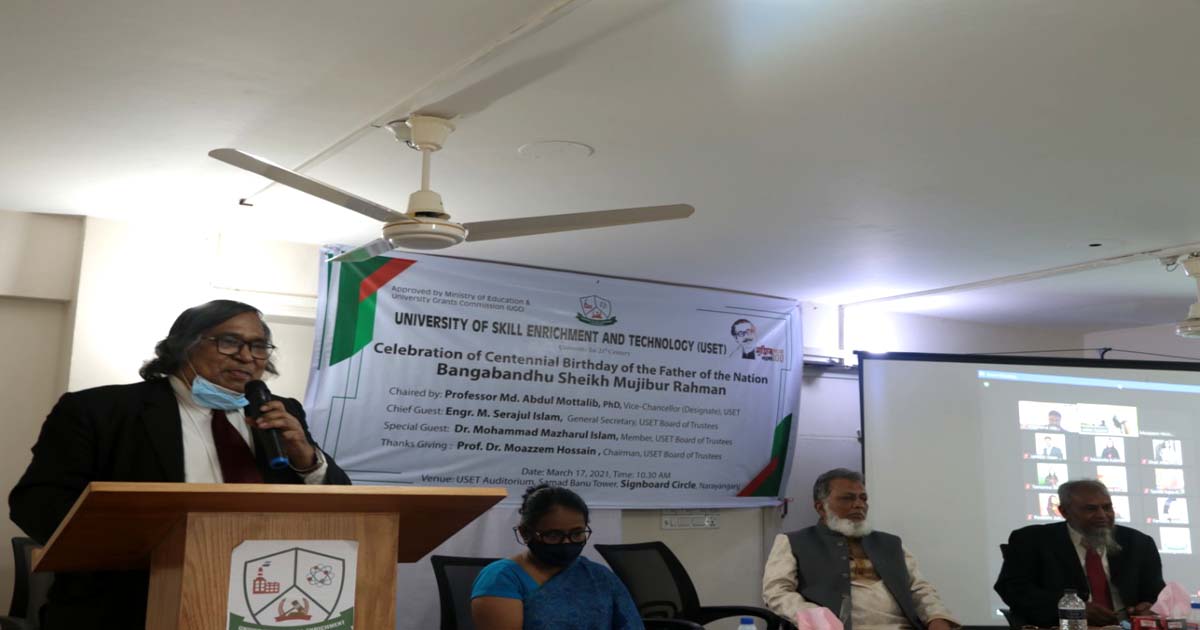 University of Skill Enrichment and Technology (USET), located at Siddhirganj, Narayanganj, has celebrated the centennial birthday of the father of the Nation Bangabandhu Sheikh Mujibur Rahman with a discussion meeting and other events at the university auditorium.

Due to covid-19 situation, most of the participants joined the events virtually. A few participants were physically present by maintaining proper health safety measures.

The first part of the program got underway at 10:30 a.m. through hoisting of national flag by USET Vice-Chancellor (designate) Prof. Dr. Md. Abdul Mottalib. The second part of the event was cutting a cake marking birth Centenary of Bangabandhu Sheikh Mujibur Rahman.

University founder and Chairperson of Board of Trustees Prof. Dr. Moazzem Hossain joined the cake-cutting ceremony virtually from Australia along with chief guest and Vice-Chancellor (designate), special guest, faculty members, and non-academic staff of the university.

Member Secretary of USET Board of Trustees Engineer M. Serajul Islam was present as the chief guest at the program. In his speech, M. Islam said that Bangabandhu and Bangladesh were inseparable. Both were intertwined. In 1971 and before 1971, people followed him, loved him, trusted him, and prayed for him to the Almighty. Bangabandhu Sheikh Mujibur Rahman had achieved an unbelievable popularity during the year 1970. If Bangabandhu were not born, Bangladesh might not had been made. Engineer Islam also urged everyone to work for Bangladesh toward building Sonar Bangla as dreamt by Bangabandhu Sheikh Mujibur Rahman.

Another trustee member Dr. Mohammad Mazharul Islam as well participated virtually as the special guest. While giving speech, he said that Bangladesh and the Architect of Bangladesh were both born in March, 1971. The father of the Nation Bangabandhu Sheikh Mujibur Rahman was born on March 17, 1920 at Tungipara in Gopalganj district. Through his bold leadership OF 24 years and bloodshed fighting for 9 months during 1971, we have achieved our independence, our motherland, our flag, our anthem, our sonar Bangla.

The meeting was presided over by Vice-Chancellor (designate) Prof. Dr. Md. Abdul Mottalib. In his short speech, Professor Mottalib said that the hero of our independence was Bangabandhu Sheikh Mujibur Rahman. He never tolerated injustice and oppression. He advised the current generation of the country to study more about Bangabandhu Sheikh Mujibur Rahman.