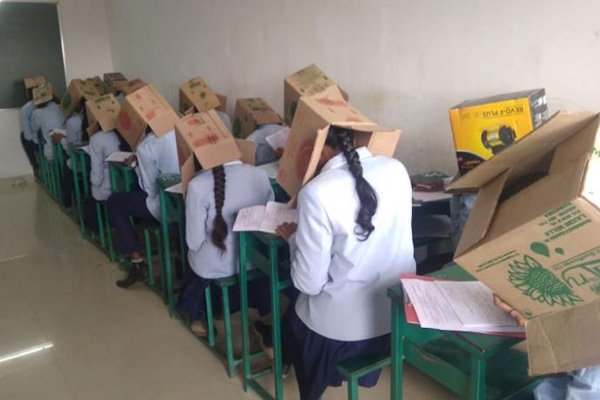 Indian students have got notoriety for cheating during exams. To prevent them from this malpractice, schools at various levels have previously taken different measures. But the results from these steps are not so positive. But a recent measure by a college in southwestern state Karnataka has drawn severe criticism on social media. The authorities at the institution have had students to wear cardboard boxes over their heads to deter them from cheating during exams!

According to local media, the Bhagat Pre-Univesity College in Haveri, Karnataka has recently trial-run the measure with approval from students’ parents. Some photos emerged online of the students’ covering their heads with cardboard boxes during exams. To dissuade students from cheating, the front parts of the boxes are cut out just to allow students to see their desks and exam sheets but to un-able them to look around.

The photos. posted on Facebook by a staff of the college, went viral immediately. At the same time, these pictures started pulling ire from netizens. In the wake of strong criticism on social platforms, the authorities have offered an apology.

On the other hand, the state government officials have stepped in to lighten the controversy surrounding the measure. The state education minister S. Suresh Kumar criticized the move in a tweet terming the school’s practice ‘unacceptable’. He said in the tweet, ‘Nobody has any right to treat anybody more so students like animals,” Kumar wrote. This (perversion) will be dealt with aptly.’ Source : CNN