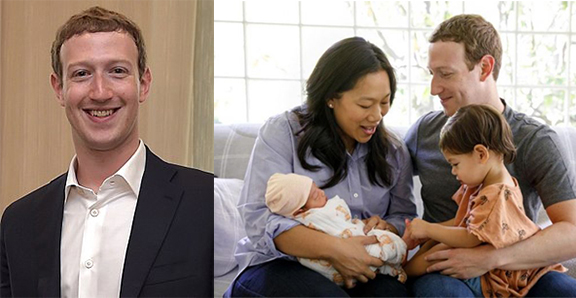 Mark Zuckerberg (36), founder of social media giant Facebook, is a shining example to others as a successful person. But his success has not come easily but with timely idea, hard word and proper planning. Following is a look at the daily life of this young billionaire and a business leader :

Waking Up Early : Zuckerberg usually wakes up at 8 a. m. Upon getting up, he takes a quick look at his own ventures Facebook, Facebook Messenger, and WhatsApp via his phone. Then he takes the shower and subsequently goes for morning meal. He likes to take coffee in the morning as well as a mood booster or refresher.

Maintaining Fitness : Despite being busy all the time, he still finds some time a day to do exercise. According to media interaction, he goes for work-out about three times a week. Thereby he remains mentally and physically fine to perform daily activities in line with plans.

Leading A Simple Life : Zuckerberg always try to lead a simple life. It is true with regard to his dress up. He usually put on jeans, sneakers and gray T-shirt as his office dress. This dress code remains the same almost every working day. To a question in 2014 about clothing, he replied by saying that he wants his life to be as simple as possible because his mission is not to satisfy himself rather better connect the world he lives in.

Working Up To 60 Hours A Week : As a successful entrepreneur and billionaire, he usually needs to lead a hectic life. As per an interview with news media CNN, he puts in (spend) 50 to 60 hours per week at his Facebook office in Menlo Park, California. But his working hour is not just limited to the time he spends at office. As per the interview, Facebook co-founder and CEO said, ‘I spend most of my time thinking about how to connect the world and serve our community better, but a lot of that time isn’t in our office or meeting with people or doing what you’d call real work.’ That means his activities center around the constant development of the giant social media platform Facebook. Of course, a team of 12 persons help him move toward that goal.

His life not just work though : Alongside work, he gives enough time for mental wellness as well. To this end, he reads books making time out of busy daily schedule. In a media interaction in 2015, he expressed that he had made his mind to read at least a new book every two weeks. In addition, he likes to travel frequently with or without family.

A Caring Family Man : In spite of busy work schedule, he makes some time out of a day for the family. He likes to spend time with his lovely wife Priscilla Chan, a professional doctor, and two daughters, Max and August. Not only that, Zuckerberg usually does the job to get their daughters fall into sleep every night.

According to US famous business magazine Forbes 2021 list of the richest persons in the world, social media giant Facebook Founder and CEO Mark Zuckerberg is the 5h richest individual globally with a net wealth of 97 billion dollar.

The idea of creating now giant Facebook came to his brain when he was a student of Harvard at the age of just 19. The reason behind Facebook building was just of students as he wanted to create a system or platform where students would be able to match their names with faces in class. The platform which came to Zuckerberg’s head during his dormitory life in 2004 now 16 years later in 2021, that little platform is the biggest social platform in the world with a market value of 547 billion dollar. Over the course of 16 years, Zuckerberg turns out to be a household name across the globe. Now