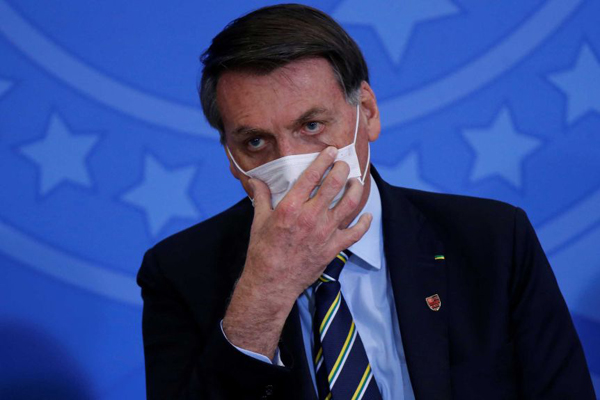 Brazilian President Jair Bolsonaro (65), who has been against the use of face masks and lockdown measures from the very beginning of the pandemic, has now tested positive for Covid-19, the President himself announced July 7 while speaking on local TV channels. As per the country’s Ministry of Communications, the President is in a good state of health and has been admitted to a hospital with corona symptoms like fever and difficulty breathing.

On July 6 evening, Bolsonaro had a Covid-19 test and a lung scan at a Brasilia hospital. Upon returning from the hospital, he told his supporters gathered outside the Presidential Palace in Brasilia that he had undergone tests and had had a lung screening which he claimed came clean.

President Bolsonaro has been downgrading the novel coronavirus crisis by describing it as just a little flu since the pandemic began in his country. He used to appear in public and attend rallies without putting on face mask. At rallies organized in support of his business reopening stance, he even hugged supporters.

This Item You May Like To Read As Well : Pakistan’s Foreign Minister Catches Coronavirus

The President has encouraged the country to reopen, even as the number of cases in the country rises, and has criticized local governments’ efforts to contain the virus through precautionary measures like social distancing, wearing masks, quarantine and shelter-in-place orders.

In terms of number of cases and infections from the virus, Brazil is now at second place, trailing just the USA. More than 65,000 people have died of the virus in this Latin American nation, according to figures released by the country’s health ministry on July 6. The total number of cases in the country is now 1,623,284 till July 6. Source : CNN

World’s Most Powerful Passport Is Japanese