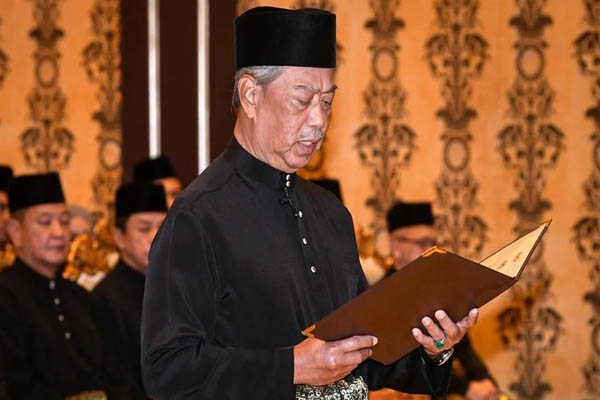 The swearing in of Tan Sri Muhyiddin has put an end to a week long political turmoil following the sudden resignation of then Prime Minister Dr. Mahathir Mohamad.

The Office taking of Muhyiddin took place at Balai Singgahsana Kecil (Minor Throne Room) of the palace at 10.33am.

King Al-Sultan Abdullah appointed Muhyiddin as the new Prime Minister in agreement with Articles 40(2)(a) and 43(2)(a) of the Federal Constitution.

Earlier on February 29, a statement from Istana Negara stated that Muhyiddin Yassin would take oath as new Premier on March 1. The king’s palace announced that following audiences with party leaders of different political parties including Umno, PPBM, PAS and others.

To note, Tun Dr Mahathir Mohamad resigned as Prime Minister of the then Pakatan Harapan coalition government on February 24. He tendered his resignation to the King. But upon receiving his resignation as PM, the king immediately afterwards appointed Dr. Mahathir as interim Premier, giving him the authority to manage the administration until new Prime Minister is picked.

Since then there had been several turn of events as several leaders including Interim Premier Dr. Mahathir and PKR President Anwar Ibrahim and others jostled to be new Prime Minister.

But finally it is PPBM President Muhyiddin Yassin who has the luck to become new PM.

Prior to becoming the president of PPBM, Muhyiddin was from, UMNO, a party from the previous ruling coalition Barisan Nasional headed by then PM Najib Razak.

He was Najib Razak’s deputy before he was sacked in 2015 for being critical of the 1Malaysia Development Berhad scandal.
Muhyiddin then joined forces with the opposition bloc along with Anwar Ibrahim and Mahathir Mohamad to form the Pakatan Harapan coalition which eventually capitulated in February 2020.

Following Pakatan Harapan’s victory in 2018, Muhyiddin was diagnosed with an early-stage tumour in the pancreas. He was hospitalized for a month between July to August to have the tumour extracted.

Muhyiddin had to undergo chemotherapy treatment for up to six months. During this time, Mahathir had assumed his charge as Home Affairs Minister.

Muhyiddin has experience in leading several ministries when he climbed the ranks at the federal level.

In 2009, he was made Najib’s deputy and Minister of Education. During his tenure, he had abolished the use of English for science and mathematics subjects.