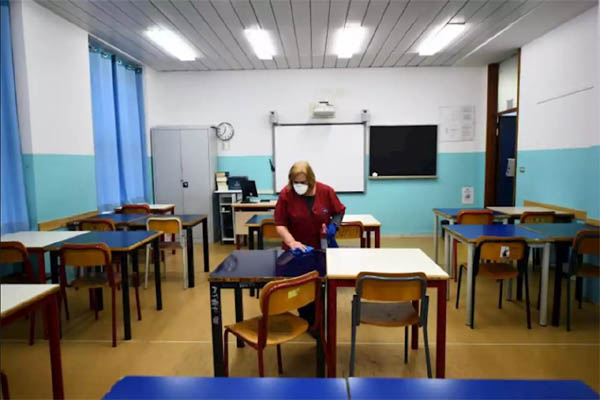 Italy is shutting down all schools and universities across the country in an effort to thwart the spread of the deadly coronavirus. The government at a cabinet meeting March 4 decided that all educational institutions in the country will remain closed from Thursday March 5 to at least the middle of the month, reports Reuters quoting government sources.

In Europe, Italy has been worst hit by the coronavirus which has now killed at least 79 people and infected about 2,502 peoples in the country. The outbreak in Italy has mainly occurred in northern region Lombardy where several cities and villages have been under lockdowns to stop the spread of the virus.

In Lombardy, the outbreak began at February 20, about 13 days ago. To halt the spread of this deadly virus, only schools and universities in the region had been closed so far. Now as the number of cases is rising across the country, the government has decided to shut all educational campuses.

The virus outbreak in Italy remains centered on the wealthy and populous region of Lombardy around Milan and the neighboring regions of Veneto and Emilia Romagna, but cases are occurring around the whole of the Italian peninsular.

Earlier, Hong Kong, Singapore, Japan, London and some cities in mainland China shut schools as part of measures to prevent the virus from spreading. Two Pakistani provinces also temporarily shut all educational institutions across the regions for same purposes.

To note, the novel coronavirus, officially known as Covid-19, has now claimed at least 3,200 lives and infected about 93,000 globally, the vast majority though in mainland China. The virus has so far spread to at least 77 other countries and territories excluding China.