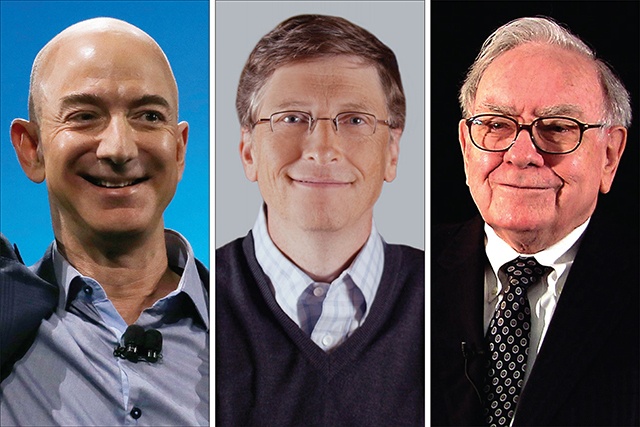 It can be said ‘good sleep, good life’. But due to modern hectic life, not everyone can have enough sleep. Though the amount of sleep vary from person to person, as per experts one should get al least 6 hours sleep per night or day.

Given the overall development or functioning of body, there is no alternative to getting enough sleep. Otherwise it will have serious negative effects on one’s health.

Well, how much successful and rich persons like Bill Gates, Jeff Bezos among others, sleep sometimes catch out attention. For them also, the amount of sleep vary vastly.

Below are the sleep habits of 10 richest and successful persons in the world :

Bill Gates : Bill Gates is an American business magnate, entrepreneur, philanthropist, investor, and computer programmer. According to Forbes, he is now the second richest man in the world with an estimated wealth of 96.4 billion Dollar. Do u know how much this man, also the principal founder Software company Microsoft, usually sleep a day? As per report, he sleeps 7 hours a day.

Tim Cook : Tim Cook is an American business executive, and is the Chief Executive Officer of Apple Inc. One of the richest men in the world, Cook spend around 7 hours a day in bed at night.

Warren Buffet : An american business magnate, investor, speaker and philanthropist, Warren Buffet likes to sleep. According to Business Insider, one of the richest men in the world with 84.7 billion Dollar estimated net wealth, Buffet usually sleeps full 8 hours at night.

Indra Nooyi : Indra Krishnamurthy Nooyi is an India-born, naturalized American, business executive and the current chairperson and Chief Executive Officer of PepsiCo, the second largest food and beverage business in the world by net revenue. She sleeps for 5 hours a day.

Jeff Bezos : Jeff Bezos is the founder of US based E-commerce giant Amazon. With an estimated net wealth of about 138 billion Dollar, he is the richest man in the world now. This man also likes to have a long sleep with around 7 hours a day.

Narendra Modi : The current Prime Minister of India is a globe trotter and is full of energy from morning to midnight. According to Modi himself, doctors ask him to sleep for at least 5 hours at night. But he usually can not go by the advice. Modi merely spend 3 to 4 hours in bed at night. He says he sleeps soundly and the secret of his energy is Yoga and Pranayama.

Marissa Ann Mayer : Marissa Ann Mayer is an American information technology executive and computer scientist. she served as the president and Chief Executive Officer of Yahoo! Marissa sleeps for 4-6 hours a day.

Elon Musk : Elon Musk, a South African-born Canadian-American business magnate, engineer, inventor & investor, is the richest person in the world now with an estimated worth of $209 billion as of January 10, 2021, as per Bloomberg Billionaires Index

According to reports, Musk works up to around 120 hours a week that amount to around 19 hours a day. With that calculation, he sleeps barely 4 hours a day that sounds quite surprising.

However, how much you should sleep must be determined by urself. For the overall benefits of your health, both physical and mental, you should get al least minimum of 5 hours sleep per day or night.

Filipinos Most Addicted To Social Media, Finds A Survey