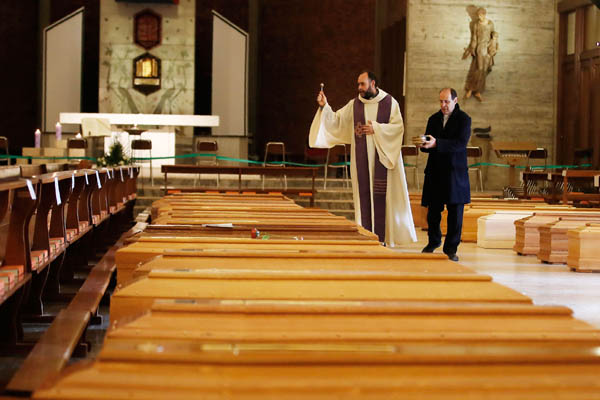 A priest blesses coffins in the San Giuseppe church in Seriate, Italy on March 28. Pic : collected

Italy has already become a valley of death out of the deadly novel coronavirus outbreak as the latest death toll from the virus in the country rises to at least 11,591 as of March 30. According to Italy’s Civil Protection Agency, there are now at least 101,000 cases in the country which make it as the second-highest number of confirmed cases in the world after the United States of America.

As per Johns Hopkins University (JHU), the USA has now more than 164,000 confirmed cases including at least 3,167 deaths which make it as being the country with the highest number of infections.

And China, the initial epicenter of the virus, is the country with the third highest number of infections of the virus. As per the university, China now has at least 81,999 confirmed including about 3,305 deaths.

Globally the novel coronavirus has now killed more than 37,000 people, as per Johns Hopkins University, USA.