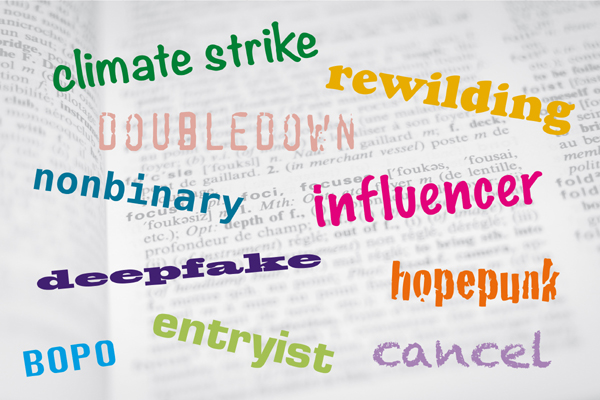 Collins Dictionaries early November this year released a list of words of the year 2019. This year ‘Climate Strike’ regarding climate movement seeking proper actions to counter climate change worldwide has been name ‘the word of the year 2019.’

Collins Dictionary’s lexicographers create the annual list of new and notable words that have been used widely across the world. This year Collins Dictionary has also issued the Brexicon, a list of 10 words related to the issue Brexit. Below is the list of the words 2019 :

1. Climate Strike (A noun compound)
Meanings : a form of protest in which people keep themselves absent from education or work to join demonstrations demanding action to combat climate change. This word has been ‘The word of the year 2019.’

2. Bopo (noun)
Meanings : a movement advocating the view that people should be proud of the appearance of their bodies, or any aspect of this, especially size.

3. Cancel (verb)
Meanings : To publicly cease to acknowledge a person, organization etc. especially on social media, in order to express disapproval of their activities or opinions.

5. Double Down (phrasal verb)
Meanings : to reinforce one’s commitment to a venture or idea in spite of opposition or risk.

7. Hopepunk (noun)
Meanings : a literary and artistic movement that celebrates the pursuit of positive aims in the face of adversity.

8. Influencer ( noun)
Meanings : a person who uses social media to promote lifestyle choices, commercial products, etc. to his or her followers.

9. Nonbinary (adjective)
Meanings : Relating to a gender or sexual identity that does not conform to the binary categories of male or female, heterosexual or homosexual
10. Rewilding (noun)
Meanings : the practice of returning areas of land to a wild state, including the reintroduction of animal species that are no longer naturally found there.

11. Stockpiling (noun)
Meanings : The activity of acquiring and storing large quantities of goods.

TRY these phrases ‘Bent on sth, Wade into sth, Go down with, Sneak into a place…

N.B : The word ‘Brexit’ was named Collins’ Word of the Year in 2016, and has dominated the national conversation ever since, with several related words being included in subsequent words of the year lists. To mark the latest chapter of the Brexit story, this year Collins Dictionary presents the Brexicon, a list of 10 words that Brexit has brought into prominence, for better or worse.

12. The Brexicon : a list of ten words which are the followings :

Brexiteer – noun: a supporter or architect of the withdrawal of Britain from the European Union
Brexiety – noun: a state of heightened anxiety triggered by concerns about the imminent withdrawal of Britain from the European Union
cakeism – noun: a wish to enjoy two desirable but incompatible alternatives
flextension – noun: informal an agreement to extend the time allowed for payment of a debt or completion of a contract, setting a new date that can be altered depending on future events
milkshake – verb: to throw a milkshake or similar drink over a public figure in order to humiliate him or her
no-deal – adjective: denoting a situation in which two parties fail to reach an agreement about how to proceed
Project Fear – noun: a name given to any political campaign that seeks to arouse public alarm about proposed changes to the status quo
prorogue – verb: to discontinue the meetings of (a legislative body) without dissolving it
remainer – noun (also Remainer): a person who believes that Britain should remain in the European Union.

WHERE to USE the Preposition ‘At’ (first part)