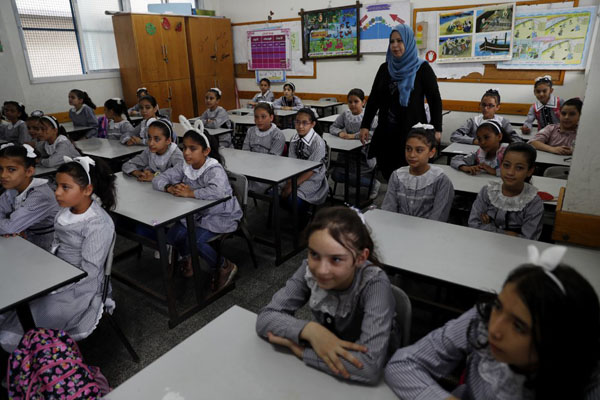 Children in Gaza Strip returned to schools on August 8 after five months of shutdown due to the novel coronavirus outbreak, reports Reuters.

But authorities have also expressed caution that they are ready to close schools again if coronavirus cases spike.

The report says that pupils mingled freely before heading into playgrounds for roll call and filing into classrooms. At one school in the northern Jabalia refugee camp, teachers wearing face masks welcomed children and offered to sanitize their hands.

Gaza, mostly cut off from the world by an Israeli-led blockade, has not recorded any Covid-19 cases in the towns and refugee camps where around two million Palestinians live.

But in quarantine centers there, just 78 infections and one death have been registered.

Yet fearing any outbreak would overwhelm the health system, the territory’s Islamist Hamas-run education ministry shut down schools in March and students completed the remainder of the school year online.

This Story You May Like Too : Bolivia Cancels School For Rest of the Year

As part of the reopening plans, several steps are taken by the concerned authorities.

Health officials in the Strip said that health workers would sanitize Gaza’s 751 schools twice a day. Children do not have to wear masks but must bring their own lunch and outdoor breaks are banned.

About 40 km away in the Israeli-occupied West Bank, which has reported a spike in Covid-19 cases, high school classes began this week but elementary schools remain closed.

In Palestine, there have been at least 17,434 confirmed cases with 95 deaths. And West Bank has 94 deaths and 13,600 cases, most of them in the last two months, as per the city health officials.